Let’s say you don’t want to buy a bug zapper for one reason or the other. But let’s assume you do have a serious mosquito problem that discourages you from enjoying a glass of wine on your porch. Here is one simple but extremely effective way to still be in control of your pest: The mosquito coil. It was invented in the 1890’s after which a few improvements followed. In 1957 they gained massive popularity and people still use them worldwide as we speak. By the end of this review however it should be clear to you that we do NOT advise you to purchase them! We will go through some of the details at first after which we will discuss the dangers.

How do They Work?

The principle is rather easy. You burn the coil after which it releases an anti-mosquito smoke. What you do is set fire to the outer end of the spiral after which it will slowly burn all the way to it’s center. There are a couple of different options on the market by various brands. The one we show you here is made by a company called Coghlan. They sell their coils in packs, each pack containing 10 pieces. What we understood is that their product has a burning time of somewhere between 6 and 8 hours. This could help you out the entire evening. However keep in mind that this duration also depends on circumstances such as wind. 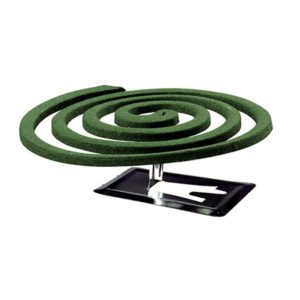 Each pack is shipped with two metal holders. The center of the spiral is placed on top to avoid any contact with surrounding materials. On the right you see a picture of how this looks like. It is worth to notice that you can buy a different kind of holder if you wish. Below we show you one of the possibilities. It is a holder that you can hang. Besides that it even catches all the ash remains for you. They sell for $8.62. 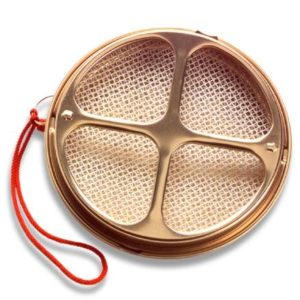 Would we buy them?

Definitely not. And the reason for that is because we ran into several articles that talk about the dangers. You see, during the burning process some chemicals will be released. One if them is formaldehyde. Breathing this on a regular basis could harm you the same way that cigarettes do. Another news story we read was an accident in which several apartments caught fire from one of these things. Since your porch or deck may consist of wood, be careful!

From reviews we have to admit that this will help you quickly and effectively. Even a serious bug problem can be solved in a matter of minutes. They seem to be popular on campings where there is a lot of fresh air. This avoids the accumulation of the smoke which is important. Still you will end up inhaling toxic chemicals. That’s why we say: Don’t buy them! Instead, why not consider to get something else? A couple of packages are just as expensive as a few serious products on our website! Just take a moment to check them out before making any quick decisions.

It seems that these mosquito coils aren’t available anymore. An alternative is offered by a company called W4W. We don’t know if they’re any different. In other words, if you’re interested, do your own research before a possible purchase.

In case you are interested, check them out from this link:

link to Mosquitoes and Blood: Everything you need to know from drinking to pooping

In some of our previous articles we already explained that only female mosquitoes drink our blood. Males eat nectar from plants (which is a sugary liquid). We've all had those nasty bites that...

Hey everyone, and welcome to Bug Zapper World! After years of camping we mastered the skills to enjoy a bug free life. On this website we document everything we've learned so you can finally get rid of these annoying pests yourself.

At Bug Zapper World we share both helpful information about bugs, as well as product reviews that do the trick. We're part of the Amazon Associates program, which means we might get a small commission by referring to Amazon.com. This helps us to keep our website running and to buy new bug zappers to review.